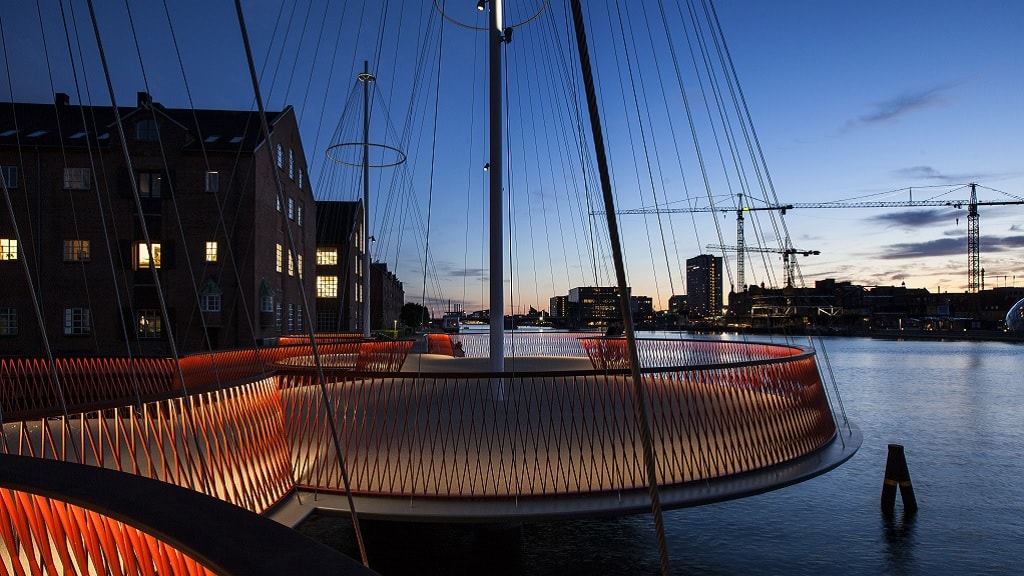 Cirkelbroen (The Circle Bridge) connects the areas around Copenhagen Harbour

In august 2015, the pedestrian bridge Cirkelbroen opened for public use. Here, it makes everyday life easier for Copenhagen’s biking commuters as it connects Copenhagen area Christiansbro and Appelbys Plads. The bridge consists of five differently sized circular platforms, each with its own mast, and it is from these circular platforms, the name of the bridge arises.

Besides the obvious functional benefit of the harbour’s new architectural landmark, the beautiful design with the five masts resembles a ship by the quay as a reference to Copenhagen’s shipping history.

Cirkelbroen encourages bicycles and pedestrians to reduce their speed and just take a small break, but on a larger scale, the circle refers to the circle drawn by inner city of Copenhagen, which the bridge helps to complete by connecting the Christiansbro area to Appelbys Plads.

Behind the design of the bridge is world-renowned and award-winning Danish-Islandic Olafur Eliasson. During his career as an artist, he has held solo exhibitions in Copenhagen, New York and Berlin among many other places, and of course, he has made many installations, artworks and architectural design all over the world, now including Cirkelbroen.